I did not always want to be a teacher. In high school, I fell in love with acting and psychology and thought about traveling down either one of those paths. So I tried both on for size, but neither seemed to fit. In between majors at college, I caught the travel bug and had a brief stint as a flight attendant, then later I was a bartender and later still a legal secretary. Meanwhile I took courses in whatever interested me, hoping I'd figure it out eventually. It took a student adviser to open my eyes -- by pointing out that most of my credits were in English Literature, he suggested I might want to consider becoming an English teacher. And the proverbial light bulb began winking above my head.

Today it makes sense that I teach English. My first love -- before acting, psychology, or traveling -- was the written word. I never leave the house without both a trusty book and journal tucked in my bag, and in my mind the two acts of reading and writing are undeniably linked. As a teacher, it is my goal to impart that knowledge to my students and aid them in becoming as skilled in reading as they are in writing.

Another important facet of my teaching philosophy is to show my students that writing is not a "one and done" activity but rather a process. Annie Lamott writes: "Almost all good writing begins with terrible first efforts. You need to start somewhere. Start by getting something -- anything -- down on paper." As a writer myself, I've had to learn to trust the process (no easy feat!), so I know writing can be a challenge.

It is my goal that students will enter my classroom this year ready to take on that challenge. I recognize that today's world presents them with unique obstacles that may threaten their sense of security and even self. I hope that my classroom will serve as a safe environment for my students to explore themselves and learn more about the world and each other. 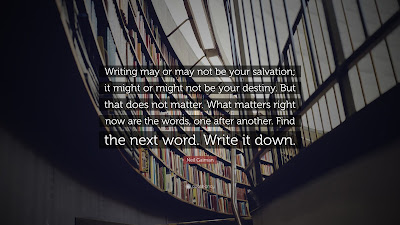 Have a question or concern? Feel free to reach out to me at ASimon78@dadeschools.net.

I worked with both Lucia Baez and Michael Portnoy on all group assignments and projects for ENG 6937. They are wonderful collaborators and fantastic instructors. You can visit their e-portfolios by clicking the links below.
Lucia Baez
Michael Portnoy